From across the archipelago: UWRF17 Indonesian Emerging Writers announced 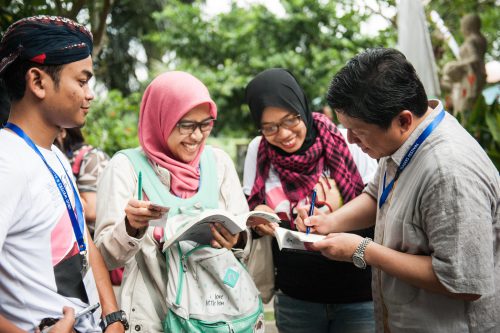 As part of its mission to spotlight Indonesia’s emerging writers and raise their voices alongside those of the nation’s most respected authors, the Ubud Writers & Readers Festival has announced the 15 winners of its annual Emerging Writers Program.

From over 900 submissions, the works were selected by a board of independent curators including Indonesian literary luminaries Seno Gumira Ajidarma and Leila S. Chudori, to be translated and published as part of the Festival’s Annual Bilingual Anthology of Emerging Indonesian Writing.

With the support of the Festival’s Emerging Writers Patrons, each of the writers will be flown to Bali where they will launch the Anthology and appear on panels alongside award-winning national and international authors.

The work of this year’s UWRF Emerging Writers is a rich insight into Indonesian language, culture, history and mythology. With many of the submissions relating to the writer’s locality, it is a rare window into some of the archipelago’s little-known regions, such as Maluku and East Nusa Tenggara. For the first time in the competition’s history, a writer from West Nusa Tenggara has been selected.

In partnership with the Emerging Writers’ Festival (EWF) the UWRF also supports one of their Emerging Writers to appear at the annual event in Melbourne. Zakkiyah represented Indonesia at this year’s EWF in June, calling it a “life-changing” experience.

“Sadly, very little Indonesian literature is translated into English,” said Founder & Director of the UWRF, Janet DeNeefe. “For our 15 Emerging Writers, having their work translated is a wonderful opportunity, as is the chance to share their unique perspectives alongside internationally-acclaimed authors and artists.

“Our Emerging Writers Program opens doors to international opportunities, and we are so proud to present these remarkable young Indonesians to the literary world and amplify brave, new voices from across the archipelago; voices of young women, the marginalized and the poor. And right now in Indonesia, this is more important than ever before.”

Congratulations to our UWRF17 Emerging Writers:

About the Emerging Writers Program

The Emerging Writers Program is an annual initiative of the Yayasan Mudra Swari Saraswati. Each year, the works of emerging writers are selected by an independent curatorial board to be translated and published in the Annual Bilingual Anthology of Emerging Indonesian Writing.

With the support of the Emerging Writers Patron Program, the winning writers are then flown to Bali to launch the Anthology and appear in the Festival’s main program.

If you are interested in becoming an Emerging Writer Patron and bringing the voice of a young Indonesian to the world, please get in touch via partnership@yayasansaraswati.org.