From 23–27 October, 2019, more than 150 writers, artists, activists and performers from over 30 countries will converge for the 16th Ubud Writers & Readers Festival (UWRF), to share stories and ideas exploring this year’s theme: Karma. 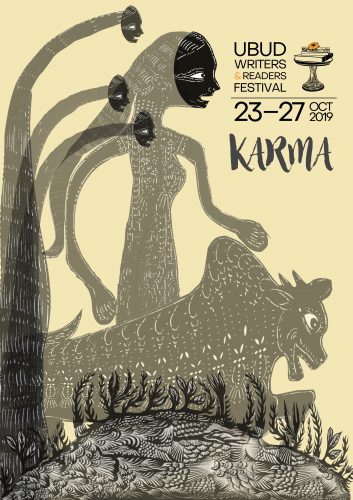 Like many of the Festival’s previous themes, this year’s is drawn from a Hindu philosophy, but this time it’s one that is known universally. For many in the West, karma is a simplification of justice served. For Balinese Hindus, Karma Phala is the spiritual principle that each action has a consequence equal in force, and similar in form. “Karma Phala nak cicih” describes the belief; cicih means certain and swift.

“As actions in their previous life affect their present, and deeds committed in the present affect their future, Balinese Hindus are aware their fate is not divine in origin, but in their own hands,” commented UWRF Founder & Director Janet DeNeefe.

This year’s Festival, named one of the five best literary events for 2019 by The Telegraph UK, will explore the impacts of our personal and collective actions on our social and physical environments.

The compelling conversations between literary luminaries, emerging writers, and leading journalists will ask whether we truly understand the consequences of our actions, and how we can best respond to the actions of others.

The fiery discussions, powerful performances, literary lunches, and after dark events will delve into the heart of every gripping story: decision and consequence.

Along with the 2019 theme, the UWRF also unveiled the artwork for its 16th year, created by community visual artist Samuel Indratma, one of the Founders of the prominent Yogyakarta public art collective, Apotik Komik.

On the process of responding to the theme Indratma commented, “As well as translating the spirit of the Ubud Writers & Readers Festival, I also tried to translate what Karma is like. Do people change their face? Do they change their form? This is why I chose the symbol of the mask. I imagined Karma as a human cycle that continues to spin, then returns again.”

“Last year’s theme, Jagadhita: The World We Create, was an important reminder that harmony with others should be one of life’s primary goals,” DeNeefe continued. “At a time when the consequences of climate change are impossible to ignore, and world leaders continue to evade responsibility, we’ll ask what Karma looks like in 2019, and consider the tensions that emerge when we don’t look it squarely in the face.

“In our 16th year, we’ll celebrate the writers, artists, and activists from across Indonesia and the world who are deeply aware of the consequences of their actions. Through cross-cultural perspectives on the Hindu principle of Karma, we’ll explore how each of us make decisions today that shape our shared future.”

Stay tuned to our Instagram, Twitter and  Facebook to learn more about our UWRF19 theme. The first round of speakers will be announced and Early Bird Tickets on sale in mid-July, followed by the full program in mid-August.