UWRF has successfully delivered its 16th year, with inspiring stories, bold ideas and brave voices at the forefront of its 170+ events held across Ubud and Bali from 23–27 October. UWRF today announced the dates for its 17th year: 28 October to 1 November 2020.

In our fast-paced digital age, this year’s Festival highlighted the importance of literature and storytelling in encouraging understanding and creating social change. Through the lens of its theme, Karma, the Festival became a hub of crucial conversations and powerful performances.

More than 180 authors, activists and journalists from across Indonesia and 29 other countries shared diverse perspectives on some of the world’s most pressing issues, such as refugee rights, the environment, mental health, migration, disability access, fake news and feminism.

UWRF’s role as a major annual injection for local businesses during the low season was strengthened, with an audience of approximately 25,000 spending an estimated USD272. Further, 85% of attendees traveled to Ubud specifically for the Festival, highlighting its role as a major drawcard for cultural tourism.

The Festival’s renowned diversity of speakers and topics was exemplified by celebrated UK food writer and restaurateur Yotam Ottolenghi. Commenting on the political nature of food he enthused, “Let’s discuss it, let’s have a conversation, let’s talk about the difficult topics. I think food is a great way to bridge chasms between people.”

One of UWRF19’s many highlights was the standing ovation for Kurdish-Iranian journalist, writer and political prisoner Behrouz Boochani, who appeared on livestream from Port Moresby, while his translator Omid Tofighian joined the conversation from the Festival Hub. “All of my work is an act of resistance. [I write] to keep my dignity as a human,” Boochani contended.

During a panel examining the vital role of translation, Tofighian stated, “Storytelling isn’t something that just reflects or reveals a reality, but is something that can transform it.”

The importance of sharing stories for social impact was also expressed by Balinese children and teen’s book author Debby Lukito Goeyardi, who commented, “For me, as a literacy activist, books are a tool for kindness.”

The role books and literature play in the fight against fake news was addressed by Indonesian writer and journalist Stanley Widianto. During an in-depth look at Indonesia’s social media landscape and a journalism industry swimming with hoaxes, he implored to the audience to, “Just read. Read a lot of books. The only way to counter fake news is literacy.” 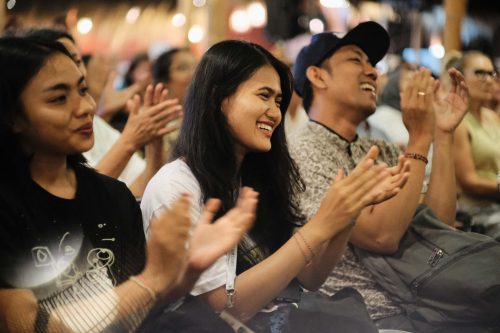 With parts of Indonesia’s environment under severe threat, the Precious Peatlands panel – supported by Pantau Gambut and WRI Indonesia – explored how literature can connect readers with nature. Balinese poet, activist and academic Saras Dewi stated, “Literature becomes a powerful instrument to present nature as subject, not just as a backdrop.”

With 40% of UWRF’s audience in the millennial age bracket, sessions directly concerning young people, such as Reading in the Age of Instagram and Millennial Memoir, proved popular. During the latter award-winning Australian author Bri Lee shared firm advice: “If you’re going to write first person content don’t waste people’s time unless you’re willing to be real about it.”

In a Festival first, the realities of living with disability and how arts events can be made accessible were presented by Australian memoirist and appearance activist Carly Findlay, during a workshop for Bali’s arts managers. Findlay commented, “It was wonderful and difficult, as disability is seen as an offensive word in Indonesian culture. How do we break down the stigma – both for disabled and non-disabled people?”

“In January this year, UWRF was named one of the world’s five best literary festivals for 2019 by The Telegraph,” commented UWRF Founder & Director Janet DeNeefe. “After countless conversations during the Festival, and after reading hundreds of messages from speakers and audience members, I strongly feel that what we delivered in our 16th year was like no other literary event in the world.

“UWRF is unique in many ways, but perhaps the most resounding aspect of our uniqueness is the generosity we receive from so many different individuals, businesses, and organizations. 180 partners helped us deliver UWRF19. On behalf of the Festival team I thank each and every one of them, as well as all speakers, volunteers and audience members who helped bring our 16th year to life. We look forward to welcoming you back next year from 28 October to 1 November!”