“I promised myself the next time I attended would be as a writer” – Annabel Wilson, AAWP x UWRF16 Emerging Writers’ Prize winner

From over 100 submissions for the Australian Association of Writing Programs (AAWP) x UWRF16 Emerging Writers’ Prize, Annabel Wilson’s Quire was the winning entry. Annabel won a ticket to UWF16, accommodation, and $500 towards airfares. She also received a one-year annual AAWP membership and fully subsidized fees to attend its annual conference where she read from her winning work, which was also published in Meniscus. AAWP and UWRF are teaming up again in 2017 to present the Emerging Writers’ Prize, this year on our Origins theme. We spoke to Annabel about her “magical” UWRF experience, her favorite new Indonesian writers, and her rewarding time at the AAWP Conference. Details about this year’s Prize here.

Having my poem Quire published in Meniscus was the second time I have been published in that journal. I have also had my poem Existing Conditions published there. Other literary journals that have featured my work are Catalyst magazine, Blackmail Press and Aotearotica. Being published in an Australasian literary journal gives a writer’s work credibility, allows it to reach a discerning audience and can open further opportunities for publication. For myself, being included in these journals has been an important stepping stone in my career.

Kindly tell us about your experience at UWRF16. As an emerging writer, what did you find most valuable at the Festival, and what did you discover about the Indonesian literary landscape?

The first time I visited Ubud was in 2012, when John Pilger was one of the headline acts. As a first-timer to Bali and to the Festival, I was quickly enamoured with the place and the event. Inspired and invigorated by my time there, I made a promise to myself that the next time I attended would be as a writer. While on the island, I kept a journal – the notes from which I reworked into Quire. This became the poem that allowed my dream of returning to come into fruition.

For me, the most valuable aspect of the Festival is the atmosphere. Ubud is an amazing place – a sacred kingdom and a kind of ‘paradise found’. To be there during the Festival is a truly magical experience. Every day, I’d see a talk or panel that brought me to tears. The richness and diversity of the program is creatively and intellectually nourishing. When you’ve had your fix, you can hop in the hotel pool, go for a walk in the wilderness or explore the temples and side-streets of Ubud. As evening approaches, it’s time to sample the Balinese cuisine, meet fellow writers and readers, check out the Fringe events. My favourites were the spoken word poetry slams at Betel Nut, Casa Luna and Taman Baca.

What makes the Festival really special is the credence the organisers give to new writers and how it provides a platform for the divergent voices of the archipelago to be heard. I am particularly charmed by Indonesian poetry – a big fan of Ayu Meutia – and I’ve made sure to buy the collection of Indonesian writing the Festival publishes each year. It’s a must-have! 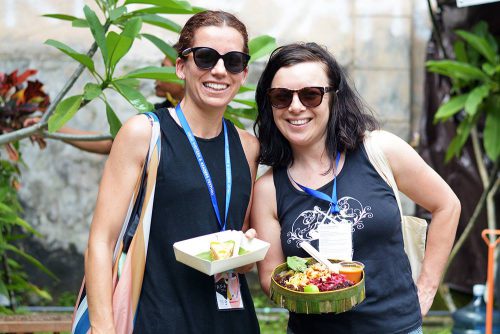 Annabel Wilson (right) with her friend Annabelle Borrie at UWRF16.

What did you gain from your participation at the AAWP Conference?

The strong sense of collegiality and openness at the AAWP Conference made my time there memorable and motivating. It was an honour to be invited to read at the event, and the networking opportunities were really helpful and encouraging. I was excited by the amount of prose poetry and cross-genre works being published and discussed, making me consider spending a stint in Australia to hone my own craft within like-minded circles. Over my four days there – from the smoke ceremony at the outset to the Creativity in the Twenty-first Century workshop with Michael Grenfell at the conclusion – I learnt a lot. The insights gained from the Conference have spilled over into my daily practice. I am especially pleased to be speaking with Bareknuckle Poet about publishing some of my work after a spontaneous spoken word session shared with Brentley Frazer and Paul Magee after the ‘official’ sessions had ended!

What kind of other opportunities from UWRF and AAWP would you like to see for emerging writers?

At the AAWP Conference, I have established some ongoing trans-Tasman connections which I would like to see more of for emerging writers. I think that there could definitely be more dialogue between our organisations and institutions about ways we can collaborate on new writing projects. It would also be wonderful to see more writers from Aotearoa New Zealand represented at the AAWP Conference and UWRF. Developing and deepening links between our cultures and countries could flourish with more opportunities like the Emerging Writers’ Prize. Perhaps in the future, an anthology of winning writing from this competition will be published.

What words of advice do you have for fellow emerging writers?

Writers write. And good readers make better writers. Surround yourself with a tribe who inspire you, and can also give you honest feedback. Keep going, submit your work to journals, competitions, residencies. Rejection letters just bring you closer to that sought-after ‘yes’.  Find your daily writing ritual and make it happen. A healthy sense of irony and a good brew of coffee can be remarkably sustaining.