No Ordinary Journey: UWRF & Seatrek Tour of the Komodo Islands with the Founder of Lonely Planet 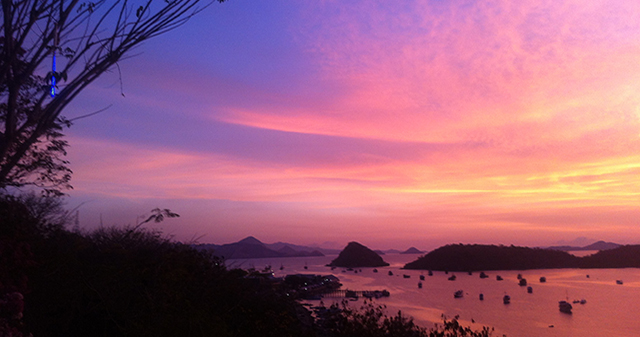 After the success of last year’s post-Festival adventure, in which authors Amitav Ghosh and Deborah Baker sailed off into the sunset with an intimate group of book lovers, Ubud Writers & Readers Festival and SeaTrek Bali are pleased to announce the second instalment in their literary cruise series.

From the October 21 – 26, 2015, just days before the UWRF kicks off for its 12th year (October 28 – November 1), long-time supporters of the Festival and founder of the renowned Lonely Planet empire

Spicing up the six day cruise with traditional Indonesian dishes will be the culinary expertise of UWRF Festival Founder & Director Janet DeNeefe, a celebrated cookbook author, restaurateur and powerhouse behind the recently launched Ubud Food Festival.

Days spent snorkelling, beachcombing and hiking through one of the most beautiful National Parks in Indonesia will be followed by star-lit evenings of readings, lessons learnt, yarns from the road, frank talks and thoughtful conversations. Delectable Indonesian meals created and dished up by Janet DeNeefe will come with a little bit of extra nourishment for the mind as well.

The cruise also includes a ranger-led trek through the park in search for an encounter with the prehistoric Komodo Dragon.  The Komodo National Park archipelago is not only known as the home of the Komodo Dragon, but also for the incredible marine diversity found in the rich, current-swept reefs and open water surrounding it.

No matter what you see, taste, or think on this exclusive six-day cruise: you won’t forget a thing.

Travelling across Asia on the ‘hippie trail’ led to the creation of Lonely Planet. Despite leaving the company Tony is still ‘on the road’ for months every year. His recent travels were published as Tony Wheeler’s Dark Lands, a follow-up to the earlier Tony Wheeler’s Bad Lands.

In 2008, the Planet Wheeler Foundation was established, funding over 50 projects across the developing world.

Adding extra flavour to this extraordinary adventure will be Ubud Writers & Readers Festival Founder & Director, Janet DeNeefe. Melbourne raised, Janet has made Bali her home since 1984. Her love of Indonesian culture and cuisine led to her opening two Ubud restaurants: Casa Luna, and Indus, as well as inspiring two cookbooks: Fragrant Rice, and Bali: the Food of My Island Home; in addition to a food festival: Ubud Food Festival.

Thirty years ago, SeaTrek Sailing Adventures pioneered its small vessel cruise operations in Bali, with a vision to provide personalised sea voyages to unique destinations and places of astonishing beauty that seem locked in time. With more than a quarter century of adventure sailing, SeaTrek has been opening the Eastern regions of Indonesia to whole generations of travellers from across the globe. www.seatrekbali.com | info@seatrekbali.com