Our new interview series Five Minutes With… sees us speaking to those in the writing and publishing industry – authors, journalists, editors, biographers, translators – to discover what compelled them to pick up the pen and work with words, and the hurdles they’ve overcome along the way. This week we spoke with young adult fiction author and playwright Chris Raja.

For general context, where has your work appeared?

My co-written play The First Garden (Currency Press, 2012) tells the story of Olive Pink – a trailblazing Aboriginal land rights activist and environmentalist. Ridiculed by her peers and shunned by the Alice Springs community for espousing ideals that were considered outlandish, she was viewed as a public nuisance, someone to be barely tolerated. However, due to her vigor and vision the Olive Pink Botanical Garden was established in Alice Springs.

The Burning Elephant (Giramondo, 2015) is my young adult (YA) novel that deals with social and religious issues as they impinge upon the consciousness of a young Indian boy, who later emigrates to Australia with his father. It is set in Calcutta during the period leading up to the assassination of Indira Gandhi, and against the backdrop of the violence against the Sikh population that followed.

The novel is told from the point of view of the young Govinda, whose father is the headmaster of a local school. It begins with the intrusion into the schoolyard of an elephant that has escaped from its owner, and is shot, then burnt by the police. This violent intrusion into the idyllic world of childhood sets the tone for the novel, which gives the innocent yet knowing perspectives of Govinda in his engagement with the crowded and complex life of Serpent Lane outside his school; his awareness of the breakdown of the relationship between his parents; and his sense that his own privileged life is under threat. 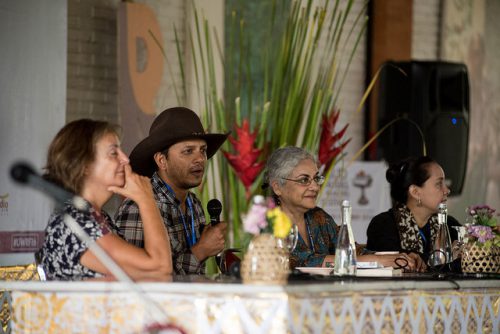 Chris Raja in his trademark Akubra at UWRF16.

My first publication was in 2000. I wrote a short story called Oranges are not the only fruit, which was published in the Saturday Age. At the time I was doing a graduate diploma in teaching at the University of Melbourne and my first child was born. In 2004 I was the co-editor of Meanjin’s Australasian issue with Tom Cho and for a while I was the Northern Territory correspondent for Art Monthly Australia. I’ve written for The Drum and Southerly.

I started writing partly for therapy after my father’s untimely death in 1993. I also wrote for enjoyment and greater awareness. I have always been a reflective person and writing helps me reflect. Now I write to entertain others, to be provocative and because I find it satisfying. I’m also an avid reader and I feel like writing is an ongoing conversation with the books I love.

I like to write fiction so it is always a hurdle to construct a story that works and to develop characters that are believable. I feel very satisfied with my writing experiences so far. Receiving a New Work grant awarded by the Literature Board of the Australia Council, launching my novel The Burning Elephant in Alice Springs at the Northern Territory Writers Festival with Ali Cobby Eckermann, watching the opening night of The First Garden in the Alice, Darwin and Sydney Botanical Gardens, were wins.

Having my book launched in China at the ninth annual Asia Pacific Writers and Translators conference in Guangzhou by Nicholas Jose was another pleasing experience. It was also great doing a reading at Shakespeare and Co in Vienna earlier this year. However, I feel my career is just beginning and my greatest wins are still to come. My next work is the best thing I have written. This year I have been awarded the inaugural 2017 Northern Territory Varuna Residential Fellowship to work on my new book.

What’s your advice for aspiring writers of young adult fiction?

My advice for aspiring writers of young adult fiction or any fiction for that matter is to write a good story. Be patient. Work hard at writing the best novel you can with the tools you have. The rest is up to your publisher and grace. Also, be gentle on yourself as writing is hard. 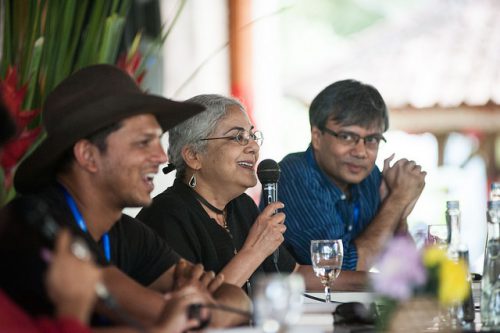 What do you envisage for the future of young adult fiction?

I hope young adult fiction is reviewed and discussed more. I hope that young adult fiction is not dismissed as children’s fiction. The Burning Elephant does not fit stereotypes. In many ways it is a subversive book that raises difficult topics. Most YA fiction I’ve read in Australia is essentially relationship and coming-of-age stories set in an Australian setting.

I wanted to write an Australian YA novel that was not set in Australia. What I tried doing is to show that coming-of-age for many migrant Australians like me has been a very different experience. I hope not only people who’ve encountered something similar will read this book and be happy that their lives are being recognised in our fiction, but it will also be a plea for those who are a bit oblivious. At least this is what I attempted to do with The Burning Elephant.

UWRF was a rewarding experience for me on so many levels. I enjoyed meeting other writers such as Helon Habila, Eka Kurniawan, Amit Chaudhuri, Juan Pablo Villalobos, Ratih Kumala, Susanne Gregor, Ellen van Neerven, Anita Heiss, Cheryl Lu-Lien Tan, Mayank Austen Soofi, among others. I also appreciated meeting the readers at my workshop Elements of Story and at the panels Imagining India and I, Migrant and the fabulous long-table dinner at Desa Visesa was memorable. Most of all, I enjoyed Ubud. What a magical location for a literary festival.

You can learn more about The First Garden here, and The Burning Elephant here. Follow Chris on Twitter @chrsraja.