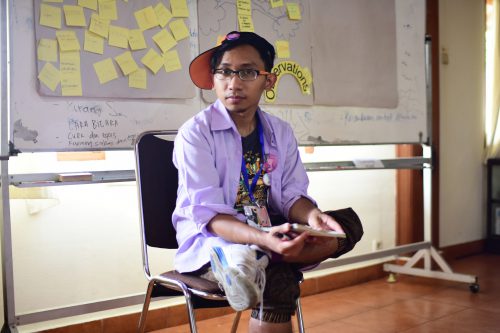 Our new interview series Five Minutes With… sees us speaking to those in the writing and publishing industry – authors, journalists, editors, biographers, translators – to discover what compelled them to pick up the pen and work with words, and the hurdles they’ve overcome along the way. This week we spoke with comic artist Bonni Rambatan.

Where has your work appeared?

I have one published comic book title, Not My Hero, serialized in the Kosmik Mook anthology. I’ve only relatively recently entered the comic book scene professionally as a writer and artist. I write more non-fiction articles, mostly theory and philosophy, and have been published in The Jakarta Post, Rolling Stone Indonesia, The Guardian, and various philosophy anthologies in the United States and Europe. From next month I will have various comics published in various platforms. These new titles will be launched from the studio and IP management company I run, NaoBun Project.

When and why did you start making comics?

I’ve always been into comics. I got into comics about ten years ago, but I quickly realized that it’s a very daunting task and I wasn’t ready to work professionally in comics just yet. So I kind of left it to work in philosophy. Then after a few years I just realized more and more that I needed to start making comics again, if only because I wanted to get crucial ideas across in a relatable and entertaining way.

That was a major reason I built NaoBun Project. I don’t ever want to leave critical theory and philosophy, but I need to get my ideas out to more people. I like to say that comics is my political praxis.

What hurdles have you overcome, and what has been your biggest wins?

It’s always about empowerment. The biggest wins are when people tell me my work has changed their lives or motivated them to keep fighting. My work tends to be very ideologically and politically motivated, although I try to keep most accessible and family-friendly. So when I get comments on how my work has empowered them, that really motivates me to do more. I build my studio on that basis. It’s a studio that’s very focused on empowerment – from the artists we work with to the social movements we partner up with, every element helps build an ecosystem of support and empowerment for social change.

What do you envisage for the future of comics?

I hope to see more format experimentation, the growth of different stylistic expressions, the rise of new geographical traditions, and a comics economy that requires less publisher monopoly. But that’s more of a hope than a prediction. As for the future I’m actively trying to build with my company, it will be centered around building an empowering ecosystem for social change through comics, including solid R&D infrastructure and a well-defined system of intellectual property management and license market.

Know what you want to achieve, and believe in it. If you just like to draw or just want to have fun and make cool things, forget it. You’ll burn out in no time. Comics are incredibly taxing both physically and psychologically, and if you don’t know why you’re doing it, you’re probably not gonna like it. If you do know why you’re doing it, on the other hand, go for it. Try to find infrastructure and support that works for you. You’ll still have to tackle the low points, but the journey will be extremely rewarding.