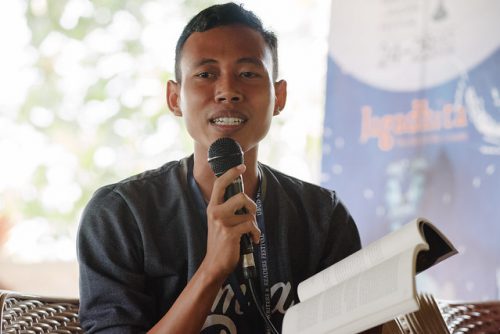 From January 14 to March 15, Yayasan Mudra Swari Saraswati, the non-profit organization behind Ubud Writers & Readers Festival (UWRF), put out its annual call to emerging writers across Indonesia: send us your stories. During this period, 1,217 writers submitted 1,253 short stories, poems, and novel manuscripts. This is the highest number of works received since the Indonesian Emerging Writers program’s inception in 2008.

Yayasan Mudra Swari Saraswati is thrilled to announce that the independent curatorial board has selected five Indonesian emerging writers to participate in Southeast Asia’s leading literary, artistic and cultural event from 23-27 October this year. Their works will be translated and published in the UWRF’s annual Bilingual Anthology of Emerging Indonesian Writing. To reflect the nation’s wealth of literary talent, these works will appear alongside pieces by ten established Indonesian writers, who will also be part of the 16th UWRF. The five Emerging Writers are:

The five were selected by the curatorial board comprising renowned Indonesian writers, Leila S. Chudori, Warih Wisatsana, Putu Fajar Arcana. Warih Wisatsana commented that all the submissions were rich in local color, and based on themes emerging from the author’s environment, such as patriarchy, customs, and myths. “These writers explored these themes in depth. The problems revealed do not stop at being a personal problem, but also express more universal social messages, and criticize various elements that are considered unfair,” he said.

The five emerging writers and ten established writers will be flown to the Festival to launch the Anthology and participate in panels alongside national and international literary greats. Would you like to help them get there?

To become part of the Indonesian Writers Patron Program, please get in touch with our Partnership Manager Saraswati Ratnanggana by emailing saras@yayasansaraswati.org.