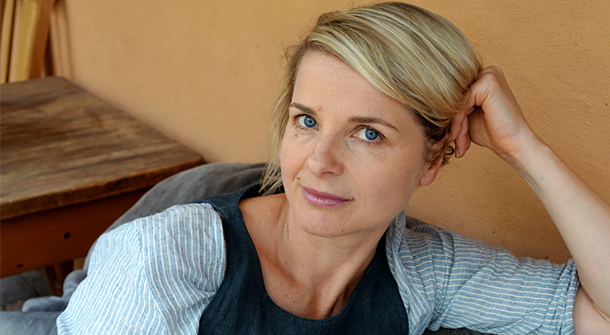 Within moments of meeting Sofie Laguna and talking about story, books and writing, I was struck by her deep understanding of and enthusiasm for ‘the emotional heart’ of a story. Her ability to capture honest, simple (and, contrastingly, complex) emotion in her books’ characters has meant readers from young children to adults connect passionately to her writing; find themselves deeply engaged and invested in the stories.

Born in Sydney, Australia, Sofie originally studied law. Yet soon discovered that — much like an ardent Portia from the Merchant of Venice — she was best suited to acting the role of a lawyer by treading the boards in a theatre, rather than presenting a case in a courtroom.

She earned her acting stripes over many years by performing her own children’s stories in schools. Perhaps it was then, in honing her capacity to express the complexities of human conflict and emotions to children and young adults, that she tuned her voice to reach a wider audience. As Portia reminds us, exactitude is all. 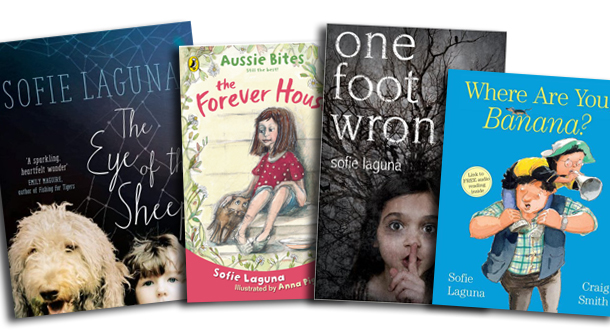 For this writer, saying not too much and not too little … and finding the right words, the considered metaphor or symbol brings stories to life. It seems that if you can perfect the art of sustaining the attention of a younger audience and take those principles into adult fiction, you have a winning formula. She is clearly masterful — when Sofie submitted her first full length manuscript it was accepted for publication. A new direction emerged.

Sofie describes herself now as author, actor and playwright and her ability to recognise the best form or genre comes from ‘allowing the story and characters’ to guide her.

“My loyalty is first and foremost to the story and characters. They dictate the style, tone and audience. The story knows its audience and I listen. The story tells me what’s right and I’ll decide early on if it falls more naturally into the child readership or adult. But my task is to remain fully in the world and voice of the character with their idiosyncrasies and vocab and motifs…”

Sofie’s first novel, One Foot Wrong, was long-listed for the Miles Franklin and she garnered an international readership. She won the 2015 Miles Franklin, Australia’s most prestigious literary award for her second novel, The Eye of the Sheep. In this, we meet the kind of troubled characters that populate Laguna’s works. We meet “Jimmy Flick who’s not like other kids – he’s both too fast and too slow. He sees too much, and too little. Jimmy’s mother Paula is the only one who can manage him. …. She holds him tight enough to stop his cells spinning. But when Jimmy’s world falls apart, he has to navigate the unfathomable world on his own, and make things right.”

Laguna has many accolades for her children’s and young adult literature including Honour Books and Notable Books in the Children’s Book Council of Australia Book of the Year Awards and been shortlisted in the Queensland Premier’s Awards.

Her writing practice is disciplined (with two young children it has to be) and, often, her creations appear at lightning speed. Her latest — a children’s picture book — was created in record time from a poem not accepted for publication in an anthology which she, “tweaked and stretched because the emotional heart of it was so strong for me. It came from looking at my two boys and imagining how they would be together, play together, love each other.”

As she begins to recite the poem I’m intoxicated with the rhythm and lyricism and a simple story that is harnessing fundamental and bold themes.

I can imagine her riding bikes with her two young boys just as easily as I can see her regaling audiences with the depth and charms of her books’ characters on a writers’ festival panel.  Sofie’s wit and playfulness broadcasts the dynamic and sublime combination of an experienced woman and mother who is still very much in touch with her inner child. It helps explain why her works range from award-winning adult fiction to novels for young adults and also plays and children’s picture books.

From the tender imaginings of two brothers growing together, to the troubled 12-year-old boy dealing with friendship and loss, to a fascinating array of characters with “real and deep problems, like we all have,” Sofie Laguna’s books will take you into realms where human depths are revealed, explored but never judged disparagingly.

You’ll emerge from reading with a wider understanding; perhaps even a greater love for humanity but at least a more relaxed acceptance of frailty and foibles that exist in us all. You’ll recognise archetypal aspects of humanity that are ages old. And you will have experienced a gifted writer who weaves these so exquisitely and refreshingly that you’ll emerge having been engaged, even confronted but definitely enriched, stretched and refreshed.

Sofie is a most welcome and anticipated guest at this year’s Ubud Writers & Readers Festival. As in all years we love original, outstanding authors … but above all we like accessible writers who love to share their stories both on and off the page.

When we talk about how she finds the ending of a story, Sofie reveals how affected she is when a favourite character in her book or, indeed, in a book she’s reading, has a sad or desperate ending.

“If somebody dies that I’m attached to, I can’t bear it. I need the endings to deal with the deep problems in a character’s life but then to have them made better by what they’ve lived through.”

Do make a point of coming to see and listen to Sofie Laguna this year. Her energy and enthusiasm for characters, writing, living life and telling a great story will captivate you. And with the tendency for her stories to have a happy resolution, you’re likely to have that happy ending too.

Catch Sofie in sessions In a Child’s Mind and In the Eye of the Sheep, as well as the ever-popular Women of Letters this October 28 – November 1. Buy tickets via the Buy Tickets page.