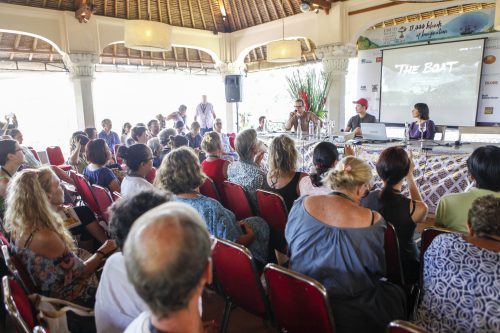 Our interview series Five Minutes With… sees us speaking to those in the writing and publishing industry – authors, journalists, editors, biographers, translators – to discover what compelled them to start sharing stories, and the hurdles they’ve overcome along the way. This week we spoke with editor Sam Cooney.

Sam, where has your work appeared?

I’m a writer and literary critic with bylines in a variety of publications – although currently most of my time is spent running the not-for-profit publishing organisation TLB, based in Melbourne, where a big bunch of us work in groups to produce the quarterly literary magazine The Lifted Brow, publish books under our new Brow Books imprint, post commentary and criticism online every week, stage events, award writing prizes, and more. I’m the publisher-in-residence at RMIT University where I teach into various publishing and writing subjects, I’ve judged a bunch of writing prizes, I sit on a couple of advisory boards, I chair events, and in 2017 I’m taking part in the Small Press Network mentorship program and the Australia Council ‘Future Leaders’ professional development program.

When and why did you start writing and editing?

I started taking writing and the world of words seriously at about 20 or 21, when I realised that I was going to be fairly miserable unless I made what was then a sideline pursuit into my main thing. I realised that in a world where money dominates, I was interested in meaning instead – and increasingly it’s a battle to separate the two. But it’s a battle I’m keen to fight, because capitalist economics has a tendency to f*ck up excellent writing and f*ck over excellent writers.

My writing career really started halfway through a writing degree, when I discovered Voiceworks Magazine and Express Media. If this publication and its parent organisation didn’t exist, there is no way that I – or a great big bunch of Australian writers over the past 30 years, including these folks – would’ve achieved anywhere near as much. I submitted short fiction to Voiceworks and was fortunate enough to have a couple of pieces published, and this process trained me in how to submit work, how to be edited, and how to be published, which set me on a path when up to that point I’d been wandering aimlessly.

My editing career also began with Voiceworks – after being published a few times, I then joined the editorial committee, which is a group of volunteers who make the magazine under the direction of the editor. It was then and there that I discovered that editing another’s work can be as creative an act as writing something yourself. From there I was hooked, and since then have found myself sinking deeper and deeper into the unglamorous world of editing, and I wouldn’t have it any other way.

What’s your advice for aspiring editors?

Fight hard to edit and publish writing that means the world to you – even if that involves a more difficult path.

What do you envisage for the future of editing?

That writers will get better and better at editing their own work, but will also increasingly understand the value of editors – that a writer can never edit their own work to any kind of level as an editor. And because of this, outstanding editors will be more and more in demand.

Without a doubt: meeting a wide variety of Indonesian writers and readers, both at UWRF and during my post-Festival satellite tour to Solo and Yogyakarta.