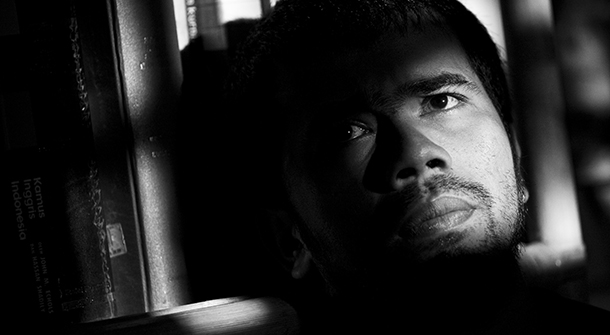 Acehnese author Azhari has voiced the woes of his people for more than a decade. The oppressive military occupation of his homeland during the war between the national Indonesian army and the GAM Free Aceh Movement (1989 to 1998) inspired him to write a series of short stories, compiled into an award-winning anthology titled Perempuan Pala (Nutmeg Woman), in 2004. He read from this volume at the first Ubud Writers & Readers Festival in October 2004, and in 2015 he returned to contribute once more to the festival.

Azhari, your collection of short stories about the situation during the war and the GAM Freedom Movement in Aceh, was published in 2004. At that time was it not dangerous for you to write about the situation, especially still under military occupation, with armed soldiers everywhere in Aceh?

It didn’t feel that way at the time. The situation was pretty much one of anarchy. Unlike today, students at that time had plenty of self-confidence and courage. Perhaps because we had just emerged from a difficult situation and we knew thousands of people had been killed during the military’s operation. We were involved in a movement to demand a referendum for Aceh, and a number of my friends were completely open about it and had no fear of acknowledging that they were freedom fighters wanting independence.

Danger arrived in 2003, during the time of the Military Emergency, as at that time, during the presidency of Megawati, the army and the police were given permission to announce a state of emergency, and Aceh became a war zone. Although this allowed the right to kill with impunity, the campaign was supported by the majority of Indonesian intellectuals, religious leaders, culturalists, major media such as Kompas and Tempo Magazine who echoed it in their editorials. Aceh was completely alone at that time.

On 26 December 2004 the largest Tsunami the world has known hit Aceh, killing more than 170,000 people, including your parents and sister.

That incident obliterated half of my soul. And I don’t wish to talk further about them. 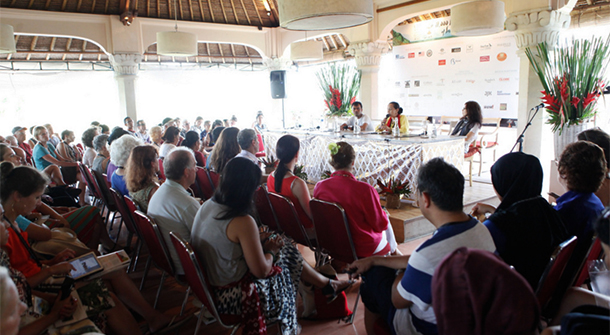 Your book Perempuan Pala (Nutmeg Woman) went on to win the Free Word Award from Poets of All Nations, Netherlands, in 2005. However, you stopped writing for two years. How did you manage to start again?

True, it was a long time before I could write again. I don’t remember exactly how I began. There are quite a few things after the 2004 tsunami that I cannot remember, especially in detail, and my ability to remember was messed up, especially concerning chronology and perception of place.

After the events of the 2004 tsunami I found it hard to concentrate. Even until now I can’t remember exactly the date I arrived in Aceh after the tsunami, sometimes I say two days after, sometimes three. I no longer remember who I first met when I arrived in Banda Aceh or where I went after that.

Contrastingly I remember clearly everything that happened before 2004, even to the tiniest details.

Back to your question. I think my desire to write again was reawakened by instinct. Besides, every time I met my close friends, both in Aceh or outside, they always pushed me to go back to my writing. I didn’t begin with the heavy stuff. The first story I wrote after the tsunami was a fantasy about a turtle.

I hear you have written a novel about Aceh in the 17th Century. How do you see history as influencing the current situation in Aceh?

The leader of GAM, Hasan Tiro, likes to remind us of the glory of Aceh’s past in his political propaganda, and stories about (our past) can be amazingly powerful, especially in restoring our belief in ourselves. In spite of the way in which Hasan Tiro accomplished this, without it I would possibly still feel ill at ease in front of my fellow Indonesians. Because the dictatorship of the Orde Baru government caused many people outside the island of Java to feel inferior, and view their own cultural heritage as poor, whilst destroying their desire to resist.

For a clearer example of this, consider—what do Indonesians understand about Papua today? Do Indonesians actually care about what happens during military operations in Papua, or the restrictions enforced by the Indonesian government there? Very few indeed.

Now we hear that human rights have got worse in Aceh since Shariah law was implemented, especially for women. Do you think there is hope for change in the future?

There is hope for change, if there is a change in politics. But politicians in Aceh now have all come from GAM, a secular organisation of freedom fighters, and it seems they are conspiring to do nothing. Clearly these politicians feel safer, and can profit more from Islamic Syariah.

May I know what you are currently working on?

I have a number of manuscripts (underway), but they are still taking shape. The one that may be published next year is a novel. I can’t share the title yet. It will have two parts, the first set in the 17th Century, about a sailor who wants to kill the Sultan to take revenge for the death of his family. This drags him into many adventures, all the way from Africa to the Philippines. The second part is a story about a Dutch East Indies doctor who is given the job of researching a number of serial killings in a city.

What are your dreams, Azhari, for Aceh’s future?

The thing I desire most is for Aceh to become a safe place for everyone, including its wild animals.

For more reflections and insights into the 2015 Festival, head to the audiocasts and blog sections. Listen into Azhari’s 2015 panel session Aceh via this link.