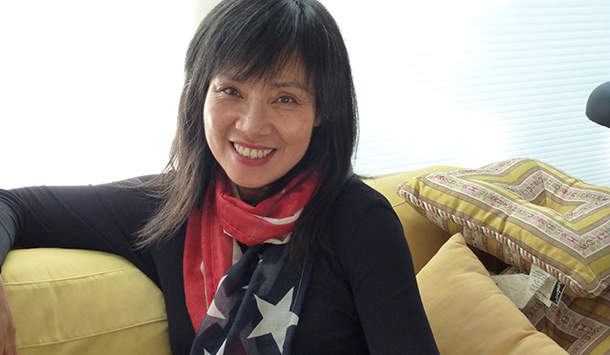 One of the most anticipated writers at this year’s Ubud Writers & Readers Festival is Anchee Min, born in China under the tyranny of Mao Tse-Tung, and picked from a farm to train as an actress under Mao’s despotic wife, Jiang Ching.  Her no-words-minced memoir of the Cultural Revolution, Red Azalea, was one of 1993’s literary sensations. At times painful to read, Min’s revelations and memories are written in spare and simple English, as neatly economic as Orwell or early Hemingway. Later works, such as Wild Ginger and Becoming Madame Mao, sparkle like poetry.

What was it like to sit down and write Red Azalea?

Anchee: Words didn’t come at first. I didn’t have words for what I was feeling inside. It was surreal. I left everything behind me when I left China, my family, relatives and friends. But memories followed me. It wouldn’t leave me alone. The longer I live in America, the more I was hunted. Writing Red Azalea was my way to confront the past.

The most difficult part of the memoir was my own role. I set myself as a victim of the Cultural Revolution then I realized that it wasn’t honest. There was more to what I had witnessed. I was a “dark shadow” too. Not an insignificant one. I part of the billion grassroots Chinese who, played part in the Cultural Revolution, which in essence was a crime against humanity. That understanding came slowly.

Since that first triumph, what evolutionary steps has your writing taken?

The evolution was to go deeper to do an literary autopsy. To reflect nobility and love as well as evil and greed.  I received no support from my family nor friends. Most of them were either scared of or opposed my writing. My family members were (and are still) uncomfortable with the “shame” I revealed.

Have you been able to work with others of your generation, who also want to tell their stories?

No, I have not been able to work with any others of my generation. I had been approached several times by someone who had a story to tell, and often a wonderful story, material-wise. But I have trouble with authors who seem incapable of putting themselves in unfavorable light. They want readers to “love” them. And that to me is a deal-breaker. So I just back off.

Becoming Madam Mao is brilliantly organised in terms of voices.  It was apparent from your bibliography that you did considerable research for it.

At the Jaipur Literary Festival, you gave a demonstration of patriotic dance poses from your training.  What is it like to do those today, now that you are free from that era?

It’s fun to do it now. Kind of mocking Mao. I can cry about what I’ve lost, but it’s better to laugh at the fact we eventually, as a nation, “failed Mao”.

Are you treated differently in the two cities you call home: San Francisco and Shanghai?

Yes, there is difference. For me it’s mostly psychological. The moment I land in Shanghai, I switch into “Mainland Chinese mode”. I’d switch back when I landed back to San Francisco. To borrow from former President Carter, I “accommodate changing times, but cling to unchanging principles”.

If a witness to Indonesia’s mass killings in 1965 was before you and wanted to write about it, but fears the consequences, what could you say to that person?

Tell a personal story. Avoid being accusatory. Be non-political; at least appear to be non-political. In Red Azalea I described what happened to me, to my body, my feelings. I couldn’t criticise my government, but I could my own bad behavior, the crime I committed at age of 10. Trust the readers. They’d figure out who was behind turning a10 year old into a killing machine, and who deprived me from my humanity. I am not pointing my fingers at anybody but myself. My message is hidden in between the lines, paragraphs. It won’t hit you until you close the book. It’s safer and much more effective.

Hear Anchee Min this October 28 – November 1. She will be appearing in-conversation with North Korea defector Hyeonseo Lee, at an intimate lunch at Locavore alongside Michael Chabon, Ayelet Waldman, and Nia Dinata, and will also discuss her book The Cooked Seed.