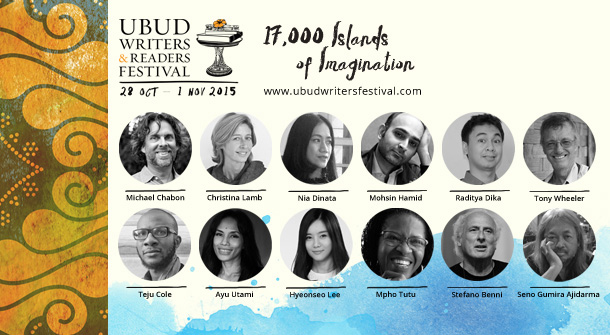 The Ubud Writers & Readers Festival has today announced the full line-up of writers and first-reveal program of events for its 12th and most exciting year yet, with over 200 events set to take place in Bali’s cultural capital from 28 October – 1 November.

After attracting more than 26,000 literature lovers in 2014, the not-for-profit Festival will this year play host to 160 of the world’s leading authors, thinkers, artists, advocates and social commentators, coming together from more than 25 countries across the globe.

Exploring the theme ’17,000 Islands of Imagination’, the first-reveal program spans five days of over 85 panel discussions, intimate literary lunches, workshops, night parties, poetry slams and food tours, with more to be announced in the coming weeks.

Hot names on the literary-award scene, the Festival will play host to recently long-listed for the Man Booker Prize for his novel The Fishermen Chigozie Obioma, winner of the 2015 Miles Franklin Award Sofie Laguna, and 2015 Stella Prize winner for her debut novel The Strays Emily Bitto.

Masters of merging the boundaries between fact and fiction are Nigerian-American author of the acclaimed novel Open City Teju Cole, contemporary Australian writer and historical commentator Drusilla Modjeska and experimental Mexican author of Faces in the Crowd Valeria Luiselli.

Bringing women’s voices to the forefront of the UWRF stage will be controversial writer on love and marriage in modern India Ira Trivedi, the fiery Indonesian feminist Ayu Utami and the hugely popular Women of Letters event series.

Translating the language and allure of their mother tongue to Festival audiences will be Chinese short-story author Dorothy Tse, the award-winning Mexican novelist Álvaro Enrigue and Italian satirical writer and poet Stefano Benni.

Exploring the Festival’s lighter side will be Australian comedian and one-half of the comedy duo Fear of a Brown Planet Nazeem Hussain, co-writer of the popular New Zealand television series bro’Town Oscar Kightley and acclaimed Indonesian producer, director and stand-up comedian Raditya Dika.

Founder & Director of the not-for-profit Festival, Janet DeNeefe, said that whilst the UWRF might be held in Indonesia, it’s a platform for people from all walks of life to come together and discuss the topical issues that affect us all.

“In an increasingly frantic and globalised world, creating a space where we can meet, listen and learn with people is more important than ever before,” she said. “UWRF is immensely proud to be a platform for voices of all backgrounds, experiences and passions to come together and share their stories with the world”.

Tickets are on sale now.