Our new interview series Five Minutes With… sees us speaking to those in the writing and publishing industry – authors, journalists, editors, biographers, translators – to discover what compelled them to pick up the pen and work with words, and the hurdles they’ve overcome along the way. This week we spoke with translator Pam Allen.

For general context for our readers, where has your work appeared?

My first translated anthology of short stories, titled Women’s Voices, supported by the Australia Indonesia Institute, was published by Heinemann. It was launched by Annita Keating, wife of former Australian Prime Minister Paul Keating. I have had many short story translations published by Lontar (Jakarta) and in the eight UWRF Bilingual Anthologies of Emerging Indonesian Writing. I have also had short story and poetry translations published in the Jakarta Post, in Latitudes (Bali) and in academic journals.

When and why did you start translating?

I began translating in my Honours year at ANU (1976), when I was asked by the Indonesian author Achdiat K. Mihardja, who was also an academic at ANU, if I would be interested in translating his novel Debu Cinta Bertebaran. It was a project that took me well beyond my Honours year and it wasn’t published until many years later, by the Australia Indonesia Association in Canberra. I discovered that I loved the process of translating. It provided an outlet for my creative instincts.

I would never have made it as a novelist myself – translating allows you to become a sort of author ‘by proxy’ because there is some poetic license and you get to explore the full range of your own language. Having said that, on re-reading it, and even after editing, I wish that translation of Debu Cinta Berterbaran had stayed in the bottom drawer. It is not an example of what good literary translation should be!

Hurdles: Time, time and time. Translating is very time-consuming. Until I retired from academia in August 2016, my translation activity had to be done in my own time – weekends and evenings – because literary translation doesn’t ‘count’ as a research output. Ironically, now that I’ve retired I still find my translation gets done in the evenings. I’m too busy during the day! In terms of ‘wins’, being funded by the Australia Indonesia Institute twice – for Women’s Voices and for Saman – was gratifying, not for the money, but for the recognition that translation matters. Getting the ‘gig’ to translate Saman was also a huge buzz for me. When it was published in Indonesian, everyone who read it knew that this was something special and that Ayu was a writer to watch. They were right. I’ve derived a great deal of enjoyment from working with Ayu over the years. 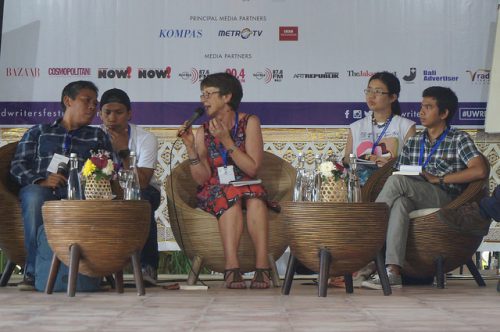 What’s your advice for aspiring translators?

What do you envisage for the future of translating?

So much of the world’s best writing is only available to us in translation. Think of the Greek philosophers, the holy books of our major religions, the scientific treatises that underpin groundbreaking research. So perhaps this question is best addressed by asking us to try and imagine the world without translation. Having said that, literary translation might be regarded as a ‘luxury’ – nice to have but not essential. But think about the popularity of the novels of Jo Nesbo (translated into over 40 languages, selling 23 million copies) and the recent success of Elena Ferrante (published in Italian, translated into English, Dutch, French, German and Spanish, among other languages).

We wouldn’t be able to watch Wallander if Henning Mankell’s novels had not been translated into English. Publishers are initially wary of translations but when they discover a winner, they stick to it. Translation is here to stay.

I could just say that every year is a rewarding experience. For me the UWRF appeals to every aspect of me as a human – emotional, intellectual and social. I think the experiences that have been most profound for me have been when I see participants in the Festival ‘discover’ the Indonesian writers who have been a part of my life for so long – Pramoedya Ananta Toer, Rendra, Seno Gumira Ajidarma, Putu Wijaya, Putu Oka Sukanta.

Every year, too, I am in awe of the talent of the young Indonesian writers selected as part of the Emerging Writers Program. It fills me with optimism for the future of writing and literature in Indonesia. Attending the Anthology launch and hearing these exceptional young people read from their work to me sums up what the Festival is all about.