Emerging Voices at the forefront of UWRF17 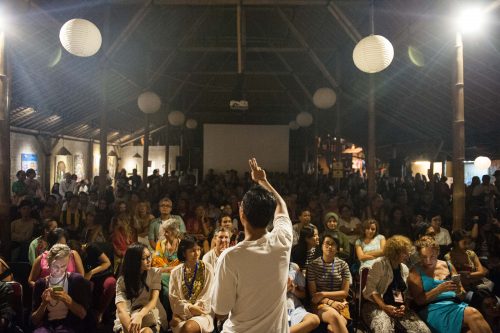 A not-for-profit organization with the mission of improving the lives of young Indonesians through literature and the arts, the Yayasan Mudra Swari Saraswati is pleased to announce the Emerging Voices program, a free, four-day event celebrating young writers, filmmakers and artists from across the archipelago.

Reborn from the Bali Emerging Writers Festival after a two-year hiatus, the Emerging Voices program will foster professional pathways for Indonesian students and young adults interested in literature and the arts. It will be conducted alongside the Ubud Writers & Readers Festival from 26-29 October.

Held at the Joglo at Taman Baca, the heart of the Ubud Writers & Readers Festival, and conducted in Bahasa Indonesia, the Emerging Voices program will comprise a series of panels, discussions, workshops and performances spanning four key areas of the arts: writing, design, music and film.

The lineup and schedule, which will be announced alongside the Ubud Writers & Readers Festival’s main program in mid-August, will connect industry professionals and established artists, writers and performers with aspirational young creatives to develop their skills and confidence to pursue a career in the industry.

“Supporting young Indonesians to pursue a career in literature and the arts, and to take pride in Indonesian arts and culture, has been at the heart of the Yayasan Mudra Swari Sarawati for over 14 years,” said Founder & Director, Janet DeNeefe.

“We’re thrilled to be bringing this program back under the banner of the Ubud Writers & Readers Festival, and to be creating a space for aspiring authors, artists and performers to learn with successful professionals and cultural icons.

“Professional development opportunities for young creatives are still relatively scarce in Indonesia. Through Emerging Voices, we hope to instill confidence in participants and their families that, despite the challenges, a career in the arts is not only viable, but respectable. It’s something to be nourished and celebrated.”