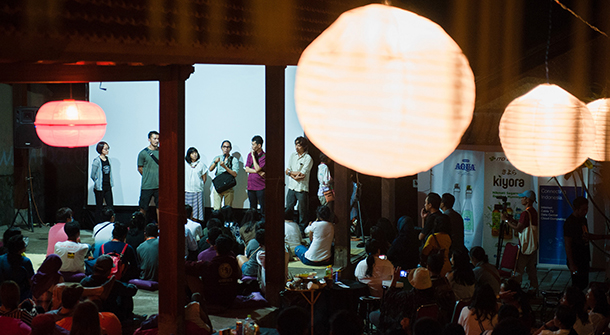 When the credits rolled the crowd erupted – the sense of pride was electric. Despite a long history of censorship, suffocating foreign competition and a severe lack of film infrastructure and political support, young Indonesian directors are triumphing in diverse and daring genres.

Ubud Writers & Readers Festival is celebrating this decisive new era with an expansive all-Indonesian Film Program. Be immersed in the archipelago’s hidden hinterlands and encounter cultures and characters beyond the traveller’s realm, then quiz the creatives behind these extraordinary stories in post-screening Q&As. With 15 films in the schedule, it’s a mini Indonesian Film Festival in its own right, and it’s free.

Here’s a wrap-up of some highlights; enjoy a lot or a little, and for the full line-up head here.

With a backdrop of devastating beauty, Asrida Elisabeth’s documentary Mama’s Soil (Tanah Mama) delves into the complexities of contemporary rural Papuan family life. Its moving female-centred narrative is a much-needed counterbalance to the raft of male-dominated filmic representations of the roiling region. Director Asrida Elisabeth and producer Nia Dinata will respond to questions.

Long Saan – The Journey Back

Multi-gonged young-gun director Erick Est’s double bill illuminates two iconic yet entirely different elements of Indonesian culture. In Long Saan – The Journey Back, take a seat in a sampan (a traditional wooden boat) beside Dayak elder Philius as he returns to his ancestral home, the threatened highlands of North Kalimantan, deep in the heart of Borneo. Erick, photographer David Metcalf and Dayak elder Philius will share their insights.

Bali’s windy months are known as musim layang-layang, kite season, when the sky is always adorned with flying fish and dragons. But kite flying is far from just a favourite pastime of Balinese both young and old. Janggan: Harvesting Wind captures the intricate cultural and social significance of the time-honoured tradition and rite of passage.

In early August this year the Australian government lowered its travel warning for Maluku province following sustained improvement in the political environment. In 1999, the year Angga Dwimas Sasongko’s cult hit We Are Moluccans is set, the climate was very different – religious violence claimed thousands of lives and displaced many more. In the much-loved tradition of using sport to bridge divides, can a multi-region football team herald new hope for Maluku? Meet scriptwriter M. Irfan Ramli and producer Glenn Fredly after the screening – R&B star Glenn will also treat viewers to  a musical set.

Flores is often flaunted as one of Indonesia’s most spectacular regions. In Yuda Kurniawan’s Memory and Hope, hear the stories of two rape survivors from Maumere, Flores’ largest town, who are dealing with the crippling stigma of their situation in a patriarchal social system. Producer Olin Monteiro and humanitarian Galuh Wandita will elucidate even further.

Oscar-nominated The Act of Killing transformed the documentary landscape and jolted audiences globally, awakening them to the horrors of Indonesia’s 1965 massacre. In a highlight of the Film Program, its equally powerful companion piece The Look of Silence, which flips the focus from perpetrator to victim, will be followed by a live video interview with director Joshua Oppenheimer.

These films only make up a third of the UWRF Film Program, but from their mettlesome material it is clear Indonesian cinema is flickering with renewed dynamism and remarkable innovation. This exhilarating new era is the topic of Main Program panel session Menonton Filmnya Indonesia, comprising Erick Est, Nia Dinata and M. Irfan Ramli mentioned above, along with Filosofi Kopi’s scriptwriter Jenny Jusuf and journalist Debra H. Yatim.