With over 150 speakers from 31 countries, this year’s UWRF lineup is a literary treasure trove of discoveries. Each week in the lead up to the Festival, we’ll speak to a writer whose work you may not yet have encountered, but who could well turn out to be your new Festival favorite. For the third installment, we spoke to Lijia Zhang, a rocket factory worker turned writer, social commentator and public speaker. 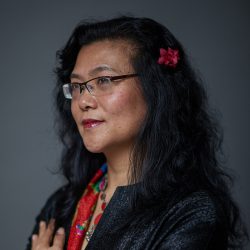 I hope to explore the issue of prostitution in China and beyond, the issue of gender equality, and the relationship between women and the market economy. My latest work is Lotus, which follows a young migrant worker turned prostitute. Prostitution has become a massive industry in China because of growing wealth, relaxed social control and growing gender inequality.

Anyone who is interested in literature and in China, which is playing an increasingly important role in the world. This is as relevant for men as it is for women.

The most extraordinary place that my career has taken me so far is the lecture podium at Fairbank Center at Harvard University. That was in 2008, a few months after my memoir ‘Socialism Is Great!’ – about my decade-long experience of working at a rocket factory – was published in the US. What a long way the former factory girl had come.

The best creative advice I’ve received was to employ fictional techniques (such as setting the scene with vivid description, character development, good conversation and sense of suspense) in non-fiction writing from my tutor Professor Blake Morrison at Goldsmith, University of London while I was working on my MA. I’d advise aspiring writers to keep a journal/diary.

I look forward to lots of things at UWRF: to exchanging ideas with the audience; to meeting fellow writers; to eating great food and to hanging out with Janet and the team!