With more than 180 storytellers from 30 countries, this year’s Ubud Writers & Readers Festival lineup is a treasure trove of discoveries. Each week in the lead-up to UWRF19, we speak to a writer whose work you may not have encountered yet, but who could well turn out to be your festival favorite. This week we hear from journalist Sanam Maher. For more than a decade, Sanam has covered stories on Pakistan’s art and culture, business, politics, religious minorities and women. 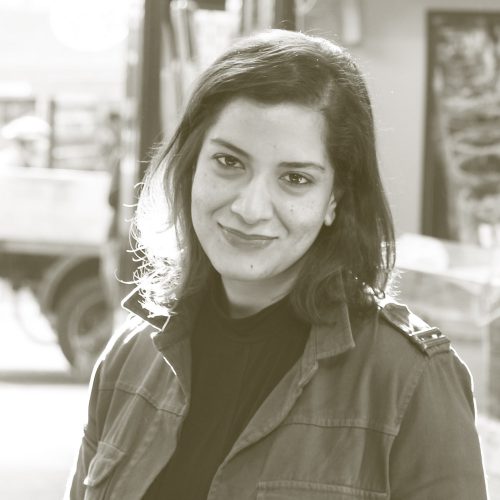 I’ve been working in the media in Pakistan since 2007. The earliest moment of realization that I wanted to be a journalist that I can remember is from December 2007. Our prime minister, Benazir Bhutto, had been assassinated and it was a confusing, terrible time, but I recall seeing a lot of chatter online and offline in my social circles, particularly among younger women, about how cute they thought her son, Bilawal, was. There were a lot of questions about whether he was single.

I wrote a piece for a local newspaper about that moment, and how ridiculous and yet so perfectly Pakistani it was for us to comment on something like that at a time when it felt like the country was being tested like never before. It’s moments like those, when you perhaps shift your focus ever so slightly from the thing that everyone is staring at and see what’s going on around it that also speaks for it or explains it better or differently – that’s what I write for.

Most recently, to a village in southern Punjab (a province in Pakistan), where the only women I could see in public spaces were covered in a kind of burqa (veil) I haven’t seen before. The burqas were a big swathe of fabric fitted to a skullcap on the woman’s head, with no slits in the fabric for the wearer to be able to see through. There was a small opening at the top of the burqa and I was told that ensured that air got inside the burqa so the women wouldn’t suffocate in the summer.

When I went quiet, a man I was interviewing told me a story about some men he knew: “They do not give their women shoes,” he said. I was confused about what he meant. He explained, “Imagine you do not have shoes on your feet and you step out of the house. Where will your eyes remain? On the ground. You will never look up – never look at any man – or look around you. You will only look down.” I don’t think I’ll ever forget that interview or that place.

My favorite is when I’m interviewing someone and they’ll say something that just gets the whole story to click right into place. In those moments, I can perfectly visualize, down to the sentences, the opening and ending, just how I’m going to structure the piece. You can have a lot of doubt about whether you’re any good as a writer, you can wonder why you stick with this job when it’s not always easy, but those moments are a great reminder of why I can’t see myself doing anything else.

My book, A Woman Like Her: The Short Life of Qandeel Baloch, is the story of Pakistan’s first social media celebrity, allegedly murdered by her brother. It’s the story of what happens when traditional systems are challenged by modernity, of a place and people that created a woman like Qandeel, but ultimately could not tolerate her. The book uses Qandeel’s story as a way into the stories of a generation of young Pakistanis connected to the world like never before, all through the touch of a button on their phones, and I don’t think you get to see or hear from these men and women – their aspirations, how they think of themselves, their anxieties about a culture and society in flux – beyond the headlines in your newspaper.

I’m interested in talking about how we’re living in a world where the lines between the public and private are constantly blurred, where we see the terrible consequences of saying or doing something on a public platform that enrages others, where there’s a great resistance to minority groups upsetting the status quo and challenging traditional forms of power.

I hope that there are readers curious about Pakistan and a kind of Pakistani story that they haven’t heard before. I think they might be surprised with how they can relate to that story, even if they’d never heard of Qandeel Baloch before or know very little about Pakistan.

I would love for readers to start with my book! However, a story that I worked on some time ago that is one of my favorites is about Pakistan’s ‘burger generation’ – ever been curious about how fast food can come into a totally new culture and transform it? You can find it here.

I’m happy to be in the early stages of researching my next book. I don’t want to say too much about the subject, but it carries forward the work of my first book in that it looks at how traditions or culture negotiates with change.

Sanam Maher is part of the Main Program panel Life After #MeToo, and will also be in conversation with Clementine Ford. Get your 4-Day or 1-Day Main Program Pass here. Sanam is also part of two Special Events, Rhyme and Reason in the Region, and Big Ideas at bridges. Tickets available from the event pages. This is Sanam’s website. Follow her on Twitter and Instagram.