In 2018, the Ubud Writers & Readers Festival celebrates its 15th year as Southeast Asia’s leading festival of words and ideas, so naturally there’ll be a flurry of special festivities to mark the milestone. The celebrations start with the Early Bird tickets, which fly on Monday 16 July, alongside the first announcement of Indonesian and international speakers appearing at this year’s Festival. In this weekly blog series, we’ll share six reasons we think you should be part of the action by purchasing an Early Bird 4-Day Festival Pass.

Reason 5: The early bird gets the best seat in the house

If you’ve been following this series you’re undoubtedly a discerning literature lover always on the lookout for extraordinary literary experiences. In this week’s edition, we’re revealing a different kind of hot tip for those who like to get in early and beat the crowd. It’s called our Front Row Reserve.

Each year, we offer ten front row seats for the Festival’s highlight Main Program sessions. From in-conversations with headline speakers, to panels on the Festival’s most compelling topics, we reserve ten front row seats for sessions we know will see a full house. For those who want to beat the crowd and rest assured a perfect view is awaiting you, a Front Row Reserve ticket gives you the best seat in the house.

Last year’s Front Row Reserve sessions included in-conversations with Simon Winchester, Jung Chang, Pierre Coffin, and Madeleine Thien, and panels with leading writers and journalists on religion, and the importance of using fiction to bring new meaning to historical events. Front Row Reserve tickets are only IDR 50,000 (AUD 5), and can be purchased from the individual event page once the full program has launched in mid-August, and also at the Box Office. Here’s an example of where to buy a Front Row Reserve from last year: 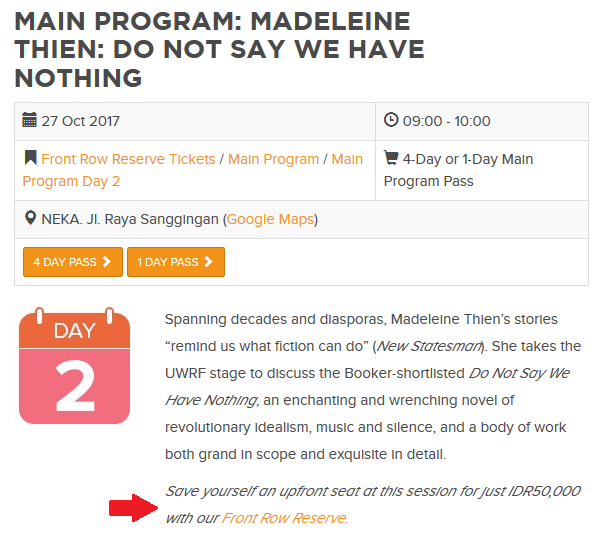 Be sure to return next week when we bring you the sixth reason why you should buy an Early Bird ticket to UWRF18. Monday next week marks exactly a fortnight until Early Birds go on sale and we reveal our first 16 speakers. We hope you’ll join us for the countdown!